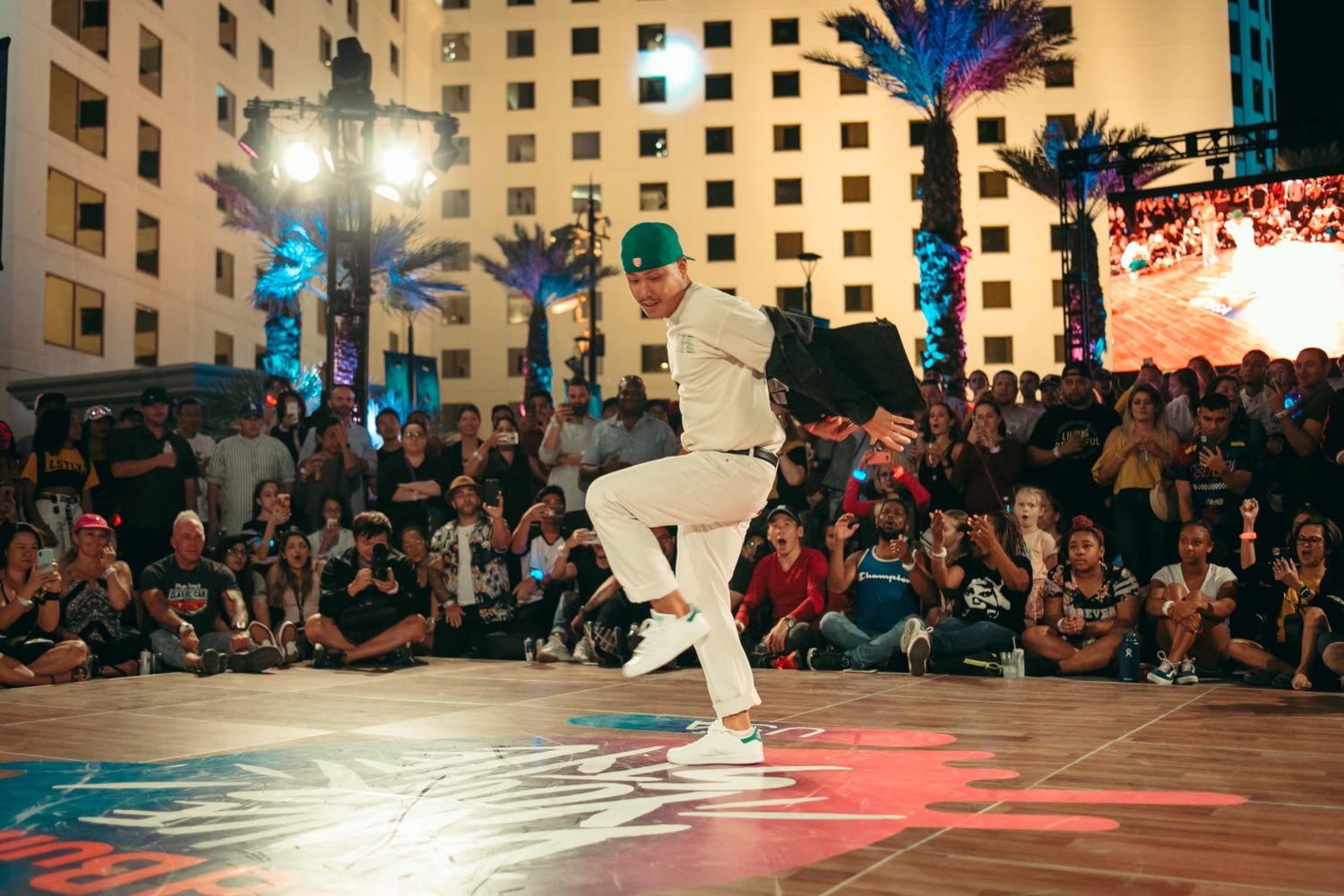 Late last month, 16 stolid-faced dancers stepped onto the red and blue dance floor resting on Planet Hollywood Resort & Casino’s rooftop to compete in the first-ever USA National Finals of Red Bull’s Dance Your Style one-on-one street dance competition. They did so without uttering a word—instead letting their bodies do the talking.

The 2019 USA finals was the culmination of three months of freestyle battles that pitted one dancer against another in a sundry of cities across the nation. The Red Bull Dance Your Style’s roots trace back to Honolulu, where the brand held its first qualifying round at the Kaka’ako Warehouse Event Space. From there, the competition continued, drawing dancers to Washington DC, Miami, Boston, New Orleans, and Los Angeles to show off their deft dance moves.

Divided by vastly differing hometowns and equally unique choreographic developments, the dancers came prepared to face off in Las Vegas, unified simply and supremely by what they convey to audiences: passion for the art of bodily movement.

The victors of the regional qualifiers went on to the USA National Finals in Las Vegas, to vie for a chance to compete in the Red Bull Dance Your Style World Finals. Slated for October 12 in Paris, France, the World Finals is the consequential stop on the road to Red Bull’s Dance Your Style destiny. The organization has hosted more than 50 events in more than 30 countries all over the world.

At the USA National Finals, much like the dancers themselves, the crowd members assembled at the edge of the dance floor as active participants. Upon arrival at Planet Hollywood, each attendee received an LED-powered bracelet that could be set to glow either red or blue. With this, the audience was equipped to raise their wrists high to cast their votes for the winner of each round: the dancer on the red or blue division of the dance floor.

The element of surprise constituted a core component of the competition. DJ Mike Murdah, who soundtracked the event from start to finish, put the dancers’ concentration to the test, aiming to catch competitors off guard by playing tracks from genres outside the hip-hop realm. The crowd judged dancers by their ability to creatively, enthusiastically, and agilely craft a routine that synchronized well with whatever style of music flowed through the speakers.

Lil O, who won the preliminary qualifier in Washington, DC, said competing in a dance battle of Red Bull’s Dance Your Style’s caliber and scale was something he’d “always wanted to accomplish.”

“I’ve been battling my friends in the neighborhood and at school for fun since I was a kid,” he told Dancing Astronaut before taking the floor at the Las Vegas finals. “To see that dance battle has come to this point where dancers can be looked at as athletes is something very great and important.”

The New York native added that he would often watch Red Bull-sponsored skateboarders when he was younger and “wonder” if he “could be a part of something like that.”

Fellow competitor, OPM, who describes his idiosyncratic style of dance as “visual intoxication,” said the inaugural Red Bull Dance Your Style one-on-one street dance freestyle competition offers a pivotal new platform for dance. He lauds the competition organizers for giving dancers the platform he insists they are repeatedly denied.

“Red Bull is actually putting dancers at the forefront, as they should be, instead of always behind an artist or in the background as a prop,” he said.

While the diverse, genre-spanning music selections of the USA National Finals organically incited some of the competitors to venture beyond their choreographic comfort zones, the unpredictable nature of the cuts chosen by DJ Murdah played to one of OPM’s most ardent strengths: adaptability.

“When I began dancing my mother would be like, ‘You gotta be versatile,’” OPM said. “She would play a song on her laptop and change it to a random song and say, ‘I want you to dance to this.’ So I would have to adapt to the next song. It was really cool doing that because not many dancers dance to different genres of music; they don’t always know how to [apply] their style to other [kinds of] music.”

Dynamism was also key to Lil O’s growth as a dancer in his youth. He says his mother challenged him to become something of a renaissance man of the dance domain, to surpass the confines of hip-hop. Lil O went on to the University of the Arts in Philadelphia, Pennsylvania, where he developed and honed his skills across an array of approaches, including jazz, ballet, and tap.

Hooks, Lil O, and OPM told Dancing Astronaut that music typically precedes the creation of a routine in each of their creative processes. The period that precedes the development of the course of sequential movements that will constitute the choreography is predicated on absorption and analysis of the music.

“I listen to the music first, [watch] how it makes me feel, and then the concept can build in seconds,” Lil O said.

“Whether you’re a dancer or [not], when you hear a song, there are certain emotions that are elicited,” Hooks added. “We all feel those emotions differently, and there’s certain imagery that will pop into people’s minds. I use that instinctive imagery that pops in on the first listen of a song to inform where I go with it.”

The explicit challenge of Dance Your Style: the slim amount of time afforded to the dancers to construct such a concept. It is by design that the expression “think on your feet” is so alive in this competitive context, and it was without reservation that the 16 dancers rose to the challenge.

Of them, Neguin, who hails from Paraná, Brazil, would triumph as the Red Bull Dance Your Style National Champion. He will now advance to the World Finals, to battle for the international title.