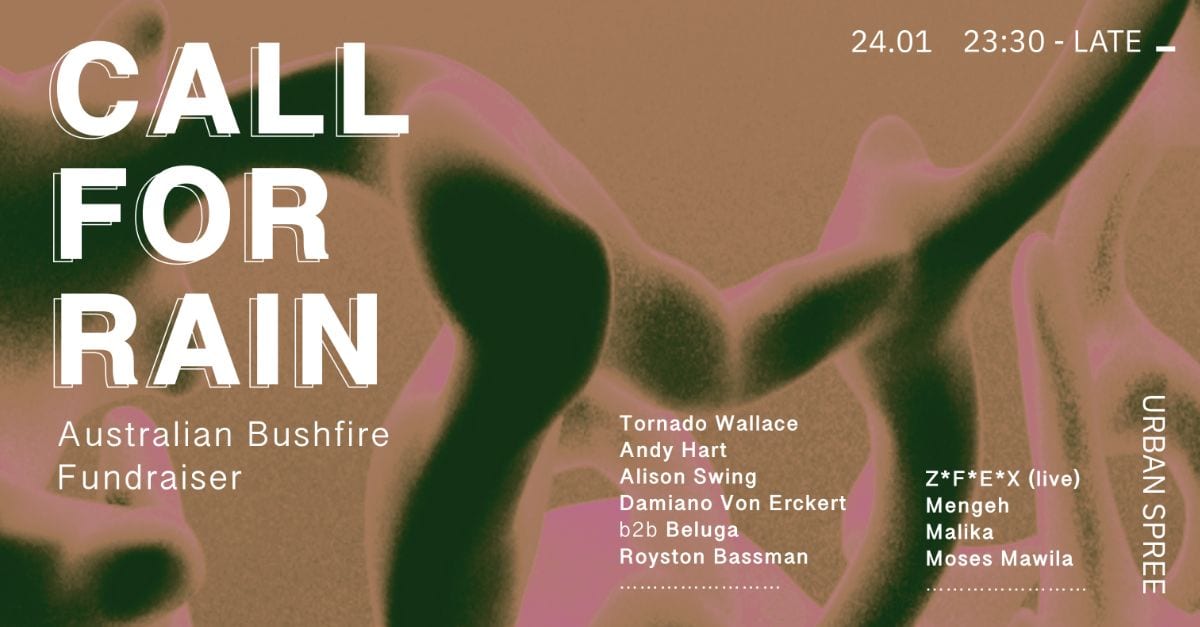 *As part of this charity event – Inverted Audio will donate 50% of ticket administration fees to Call For Rain and distribute to their chosen charities.

On Friday 24 January, Call For Rain invites the city of Berlin to gather and dance for the relief of those affected by the bushfires in Australia at Urban Spree.

Australia is currently witnessing the most horrific and catastrophic bushfires to plague the planet. Thousands of homes have been destroyed or damaged, over 10 million hectares of land have been ravaged and over 1 billion animals have been estimated to have been killed as a result. Thousands are displaced. The death toll continues to rise. This isn’t a national crisis. It’s a global crisis.

For centuries, cultures have practiced rituals in order to Call For Rain, and now we invite Berlin to join us on the evening of Friday 24 January at Urban Spree to come together, dance and to take part in a collective effort to raise funds for those at the forefront of fighting the fires that continue to burn Australia.

For the occasion, Call For Rain assemble a tantalising lineup of Australian natives and international talent to bring the vibes to Urban Spree. Running Back regular Tornado Wallace headlines the bill alongside felllow Melbourne resident Andy Hart. Damiano von Erckert plays a back-to-back with Beluga and Wilde Renate resident Alison Swing joins in on the action too.

Call For Rain with distribute 100% of proceeds from this event to the following charities:

Wildlife Victoria
A wildlife rescue and sheltering association committed to rescuing, rehabilitating & providing equipment for the rescue of wildlife during the bushfires.

Call For Rain would like to acknowledge the traditional owners and ongoing custodians of the land; past, present and future. We recognise their connection to land, water & culture. We would like to pay our respects to their Elders past, present, & emerging, as well as all those affected by the catastrophic bushfires.

Cocaine will not cure coronavirus