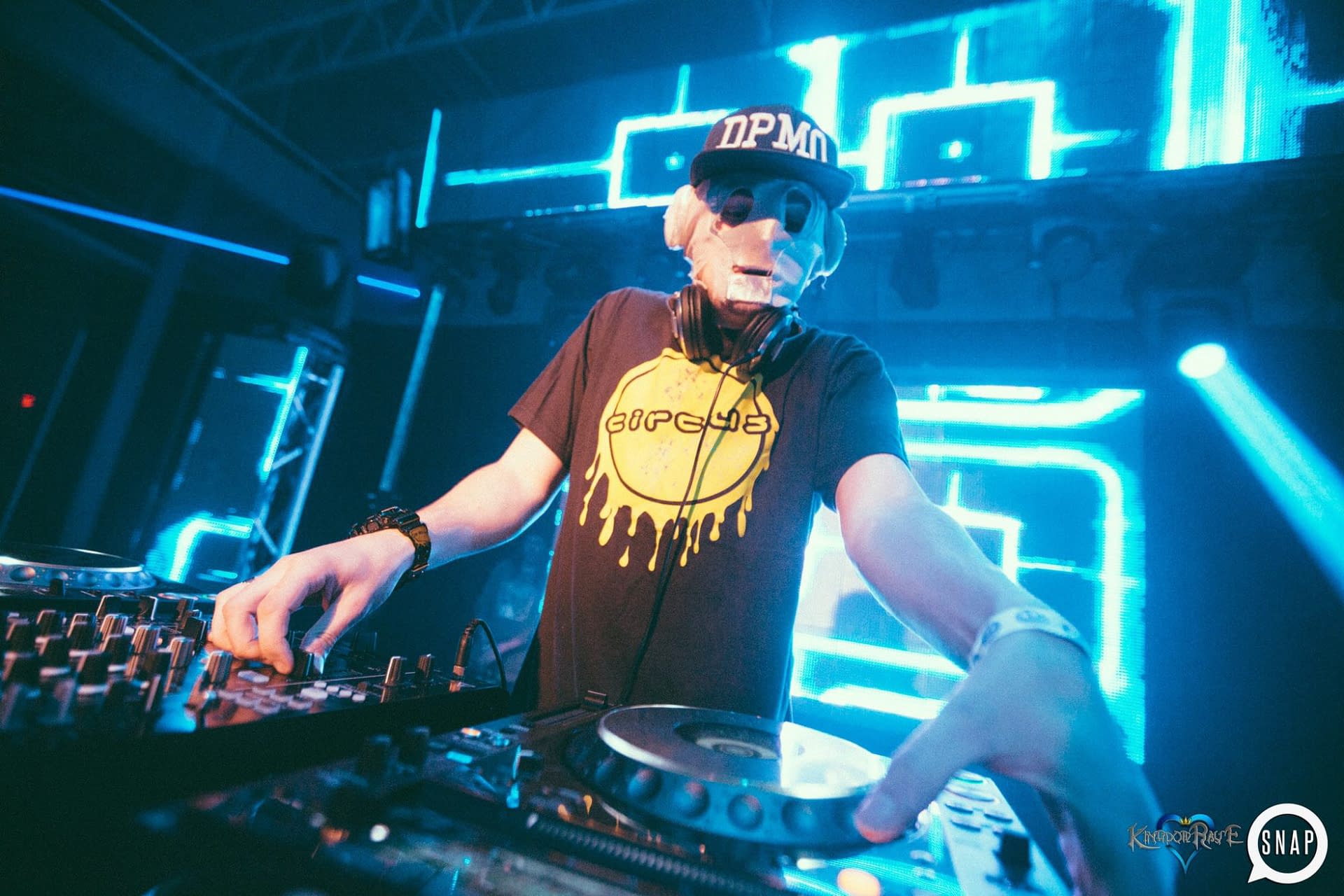 FuntCase embarked on his DPMO (Don’t P*ss Me Off) label journey in 2017, and while under Circus Records, he was able to showcase an onslaught of dubstep’s filthiest tracks through a three-volume compilation series, FuntCase Presents: DPMO. After this strong start, the masked artisan is now overseeing the official launch of his DPMO label with a four-track EP, Corruption.

FuntCase collaborates with some of the finest up-and-coming producers in bass music on the DPMO-installing effort, enlisting Versa, Yakz, Jkyl & Hyde, and Stoned LeveL for a monstrous upheaval. To FuntCase and his collaborators’ credit, all four tracks catapult fans into otherworldly realms of prismatic rhythms and afflicting doom.

In an interview with Dancing Astronaut, FuntCase discussed the label’s journey, sourcing Corruption‘s collaborators, mental health, and what’s ahead. Find both the full interview and EP below.

Can you detail your label’s three-year journey and how your latest EP, Corruption, fits into it?

FuntCase: “I’ve always been a fan of finding new talent and DPMO was really just something that happened [as a result of me] moaning to my manager about all the insane music I’d found, but none of it getting a release) at least not on a decently reputable label). For instance, I could have maybe signed and released ‘Jotaro’ by Phiso, but had no platform and therefore missed out on signing an anthem.

Circus offered [to give me the opportunity to release] all the music [I was championing] on a compilation. After many talks, we decided to release it under my brand, DPMO. After DPMO Volume 3 it really seemed like we had something here, and [we] once again had a talk with Circus about it and emphasized that it was probably the best time to turn it into a proper label, finally.”

Corruption features four different collaborations. Was there anything unique in particular about the creative processes behind these collaborations?

FuntCase: “For me, this EP was a double whammy of showcasing artists who are on DPMO and push[ing] the first release [on] DPMO Records. In that sense, a collaboration EP made the most sense; we could showcase [these artists’] sounds and give them focus [while putting] a FuntCase twist in the mix to make it interesting.

All four of the artists I chose to work with have their own key sounds and I really feel like this EP is a great mix of tracks to listen to one after another. In terms of how these tracks were done, I basically told them to start an idea and then I would jump on it and do my bit, but the way I ended up running these collaborations was that I really wanted their sound to be the prominent factor in the track. So, when I made the tracks, I let their drops be the main sections. I would build around those and created them as they sound now!

All the tracks have their own theme; it’s not an EP [where all the songs] sound the same. In terms of the tracks’ sounds, I just feel like the EP has really got great replay ability.”

Corruption is a newcomer to the dubstep release ring. Thinking about the genre at large, from your perspective, how has it largely changed or even stayed the same?

FuntCase: “I think the flow of dubstep as a sound has remained fairly the same. It’s heavy, stompy, or bouncy, and those really seem to be the dominant factors in the sound right now. This new style of ‘future riddim’ has peeped its beautiful head through and I’m all for it. That really seems like a natural progression from such [the] loud and aggressive year [that] 2019 to 2020 has been, with the sound and style pioneered by MARUADA really setting the stage.”

Let’s switch to mental health: you tweeted that you could write a “40,000 page” paper about mental health in music over the years. What would its title be?

FuntCase: “I would 100 percent call my book ‘It’s not what you think.’ I base that off of what people assume touring is like and how it’s portrayed by people. Maybe one day, I’ll write a book about my own experiences within the DJ life. I’ve kind of toyed with the idea anyway, but I really think it would be a great insight into the deep world of world touring, DJing, music production as a full-time job, and everything in between.”

What with quarantine and the recent loss of your long-time friend and creative partner, Cookie Monsta [Tony], it seems fair to assume that the topic of mental health has been on your mind. Are there any memories with Cookie Monsta that you’d like to share?

FuntCase: “It was a shock, I can’t lie. Tony had always been a bright, energetic crazy spark in my life, and someone [with whom] I shared most of my best and biggest touring memories. The first few days [after finding out that Tony passed] hit me pretty hard, but I really want to strive to keep up what I’m doing and do well for him; he for sure would have wanted that. I have way too many memories to share, but I hope his legacy lives on in music and in the genre and that he’s never forgotten.”

Do you have any advice for artists who may struggling with mental health or with pressures to create amid COVID-19?

FuntCase: “If you’re struggling with creating music, for instance, [when] having a mental block, just step away from your space and do other things. Let it all happen naturally; you write your best music when your head is clear and ready. If you, however, feel like you have a mental block but feel like you’re a bit useless or unproductive and want to keep up working on something, maybe make yourself some sample packs for when you feel creative again. Make kicks, snares, bass samples, FX noises, really anything! Future you will appreciate that.”

FuntCase: “I think really it’s to get back on the road and tour again. Staying at home has been great, as I’m a bit of a hermit anyway, but I have a lot of pent up energy now that I need to expel on stage! Also, I have so much new music that I haven’t managed to test out live to gage reaction, so I’m really looking forward to that.

I want to feel like [2021 is] a new year and new beginning almost. 2020 has been such a year I really wish to forget for so many reasons, and I can’t wait to see where myself and DPMO are heading. We have great plans.”

MORiLLO Brings Tribal Music into 2021 with New Album, Shades of...