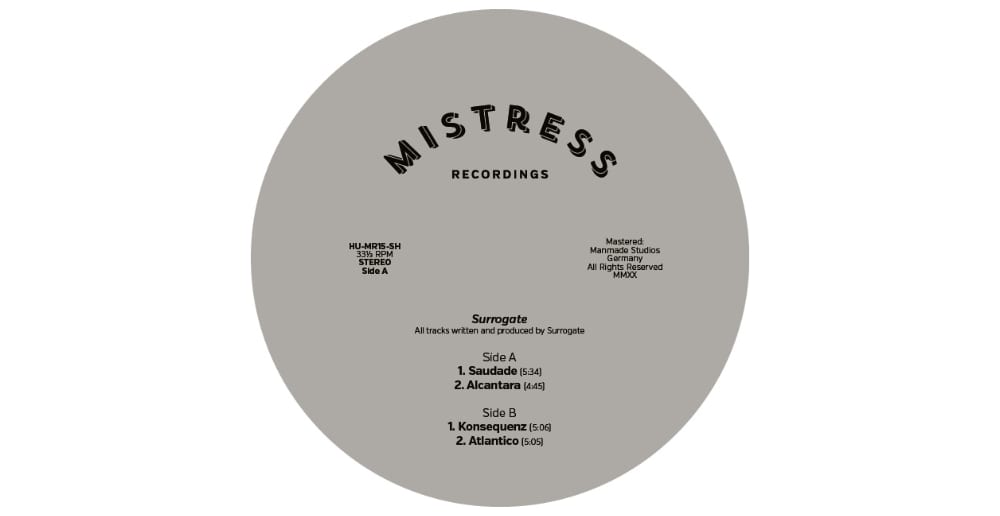 Releasing a press release announcing that your label’s forthcoming release is from “a US veteran producer and DJ from Detroit who was releasing under primarily one name with little deviation in the last 20 years” is like catnip to music journalists. It’s a guaranteed ploy to set fire to various WhatsApp chats. And while some thrive in the world of speculative Discogs trawling, to others it might feel a bit like a bit of a publicity stunt.

Regardless of which side of the spectrum you sit on (and who you may or may not think Surrogate is), it’s pretty hard to deny the absolute force of this release on DVS1’s Mistress Recordings. This is all to say, whoever Surrogate is, they know their way around their machines. This is driving, deep dance music that feels both timeless and very contemporary.

Across the EP there is a sense of restraint. The kicks are big, but not so big that any of these tracks feels overcooked. There is also a focus on reverb and dub across the 12-inch, adding an element of spacious introspection to their force. No track embodies this more than the one we are premiering here, the A2, ‘Alcantara’.

The track is named after the port area of Lisbon and the title makes sense: there is both a European and beachside feel to it. The synth line feels aquatic as it pulses gently across the mid range before some light percussion sashays over the track; it’s flirtatious, but not overbearing, inviting rather than  commanding you to reconsider rejoining the dance floor. That said, the track, despite its European name, still feels distinctly Midwestern. The chords have a way of making it feel like this is a Lisbon we can only remember by scrolling through iPhone photos; Europe through a melancholy Motor City filter.

‘Mistress 15’ is scheduled for release 22 February via Mistress Recordings. Order a copy from Bandcamp.

A1. Saudade
A2. Alcantara
B1. Konsequenz
B2. Atlantico
DX. Radikale (Digital Bonus Track)

Leaving Laurel Drop ‘Through And Through’ EP on Anjunadeep