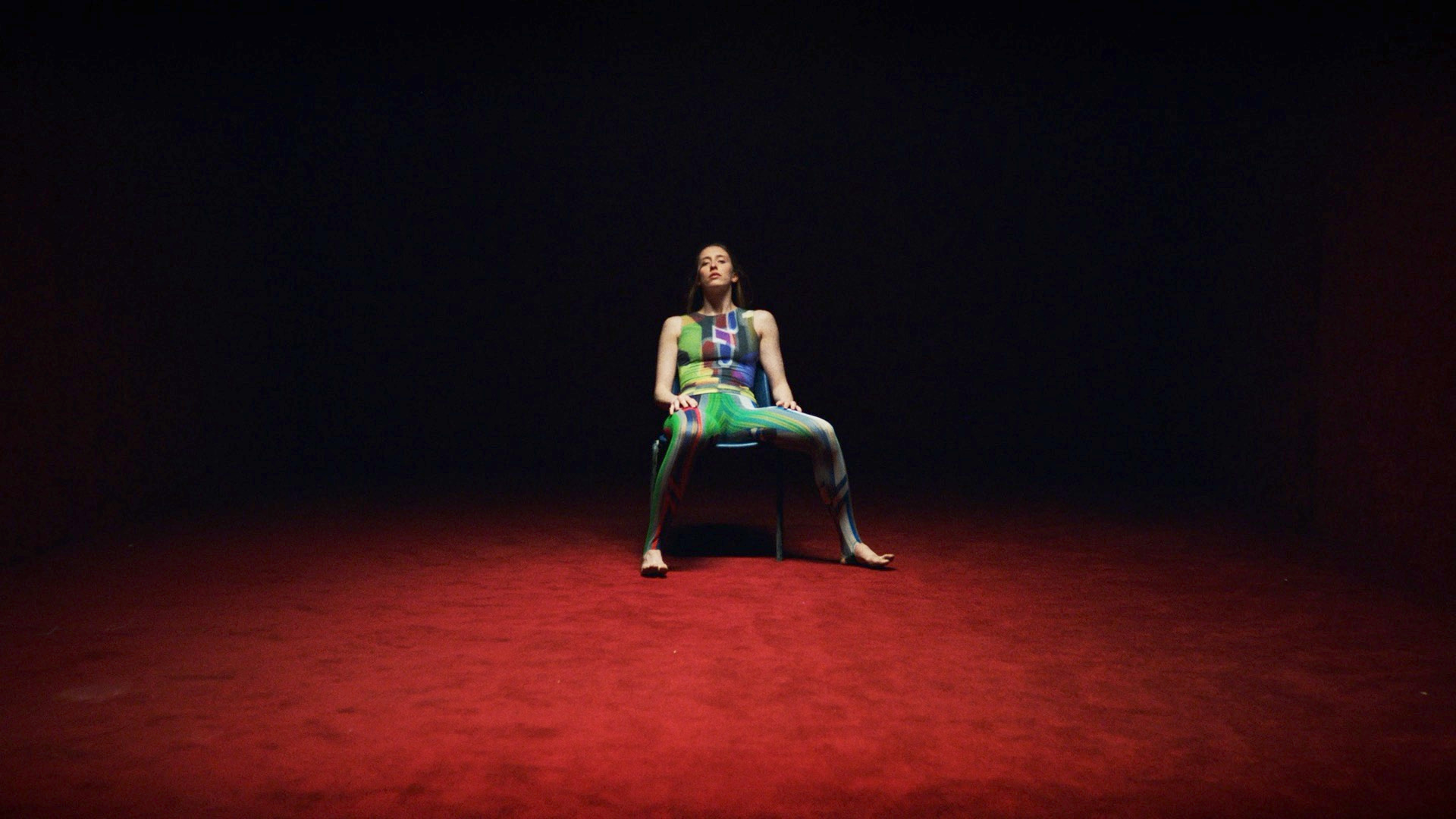 Phantom is the first of a new series of original commissions from Fact. Filmed at 180 Studios, the work was devised and directed by Holly Blakey and features original music from Gwilym Gold, as well as costumes from London-based designers Chopova Lowena.

Despite always working from an intensely personal place, Holly Blakey has never considered any of her work to be wholly autobiographical, until she worked on Phantom. Originally commissioned by the London Contemporary Dance School for the EDGE Postgraduate Dance Company, Phantom is described by Blakey as “a ritualistic summoning of something that never arrives”, a spiritual interrogation of the symbolism and aesthetics of pagan fertility rites and a wry ode to folk dance traditions. Though she draws heavily from the esoteric and supernatural, the narrative of the piece is very much lifted from Blakey’s own life, rising up out of a very real place. “Phantom was made because I was commissioned to go and make this new work for EDGE and I had just had a miscarriage,” explains Blakey. “I felt completely exhausted and pretty helpless and I hadn’t any ideas and I didn’t know what I was going to do. I didn’t have much strength.”

The prospect of creating an original project with a cohort of talented young dancers, none of whom she had auditioned, or even met before, and all of whom were wearing face masks during the initial, socially-distanced rehearsals, was extremely overwhelming. For inspiration Blakey turned to her reference book, which she describes as “a whole load of shit that I’ve scribbled down over the years”, to try to find a place to start. “I opened my book and it was an egg. I was like, this is a bit much, but then I thought, fuck it, I’m just gonna have to go into this.” The result is a dark and dizzying exploration of pain, pleasure, anguish and empathy, a contemporary fertility ritual the purpose of which is felt not in the corporeal world but as a loud and urgent call for togetherness, a rising shout heard as an invocation of a spirit that might look like nothing to the naked eye, but is imbued with libidinal charge, primal affection and emotional honesty.

At the end of the dance the phantom hangs in the air, yet nothing has arrived. We are left, panting and sweating, among the dancers, the wracking paroxysms of labour channeled into a dance of intense intimacy and defiant strength that subsides in anticlimax. “The whole dance is really this big, long building of slow anticipation that just stops,” explains Blakey. “I think without realizing it, and then probably somewhere realizing it at the same time, I was creating an experience that I’d had, really unraveling it in it’s mundane nothingness.”

An ensemble performance devised for 14 dancers, the piece features a brutal and exhilarating score from Holly’s partner, Gwilym Gold. “There’s something about Gwil being my partner and writing the music for this thing, the music of this miscarriage, that felt really important to me for this work,” she says. Phantom also features costumes from Chopova Lowena, a pair of London-based designers whose sustainable hybrid practice draws from retro sportswear and Bulgarian folklore. Both elements are stark in their irresistible vulgarity, with Gold’s raging guitar riffs, deftly hammered out on a Fender Rhodes, and layered hand claps providing the perfect counterpoint to the colourful cut and sew of Chopova Lowena’s patchwork creations, which rupture the cold light of Blakey’s stage. “The film is capturing choreography for a live work,” explains Blakey of the film, the first of a new series of original commissions from Fact. “What was very important to me is that it also had a life that felt of its own and of itself.” Tasha Back’s fluid camera gets in far closer to the intricacies of the piece than any live audience could, every heaving sigh, furtive gesture and coquettish retreat captured in vivid detail.

“I’m more influenced in my work from watching films than I am from other pieces of dance,” continues Blakey. “I really like to see how you can describe a feeling through doing almost nothing, through doing less.” This specifically filmic frame of reference is foundational to Blakey’s singular approach to movement, as she explains: “we’re often taught to negate the idea of music in dance, which sounds almost silly, but it is true. In our training it’s how can you get to the purest form of choreography.” For Blakey, it’s capturing the unconscious response to rhythm and sound that most interests her. “There’s something brilliant about how we dance to music and how we love music and how, when we’re as a group, we dance to music together,” she says. “I’m very interested in this idea, it’s a theme that follows through a lot of what I do, it’s about togetherness and dancing with music.” She recalls the moment she first heard an early sketch of the score blaring out of Gold’s home studio. “I think I just heard it when I was cleaning my teeth,” she explains. “I just ran in there and said that I wanted it. It was just the loop, over and over again and I started making the phrase with that loop.”

The composition, entitled ‘Phantom 1&2’, tears through the piece with rabid energy, raucous feedback and thumping percussion collapsing midway into a deluge of rhythmic clapping, the feverish participation of unseen participants in the ceremony. “The music is so crass and simple,” says Holly. “There’s something funny and humorous about that, to me.” Arresting in its rawness, Gwilym Gold fashions a tempestuous aural landscape malleable enough for the complex interplay of 14 different dancers. Snatches of narrative emerge through the crowd: a spurned proposal, a vicious fight, a fleeting tryst, each bubbling up to the surface before being engulfed back into a whirling mass of limbs and sound, with Gold’s relentless looping beat a continual through line threading through the chaos.

“You end up with the root of the idea, rather than anything else,” says Blakey of this nonlinear approach to narrative. “I think that’s what can make it feel quite violent, or aggressive. Those little narratives are quite clear.” Crucially, it’s also from these small moments between the dancers that Phantom’s softer edge is found, an aspect of the film and the performance that it’s sometimes easy to miss. “It’s important to note that Phantom is a bit stupid and silly. It’s a little folk dance,” says Blakey. “There’s loads of things in there that are silly and funny, it shouldn’t be taken too seriously, in a way.” It might be a hard lens through which to view this particular work, but trying to figure out the true nature of Phantom has been a part of the project from its very beginning. “I sometimes wonder, should we be able to laugh at everything,” Blakey says. “Should we just be able to really laugh at everything? I don’t know if that’s true or not.”

An original film commission by Fact

Dugong up next on Pace Yourself with ‘Horizions Sauvages’