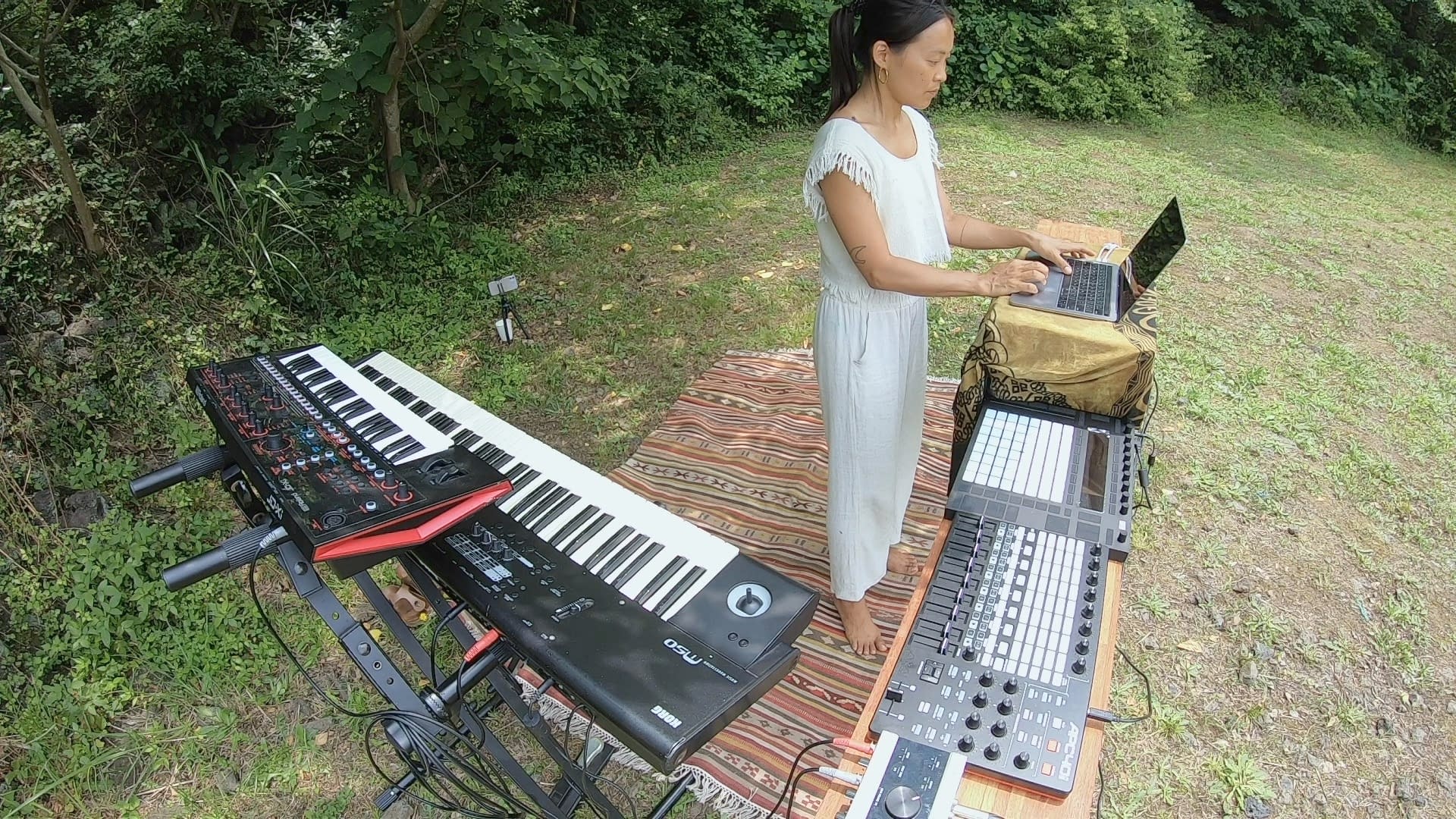 For the final instalment of Seoul Community Radio’s Fact Residency, the station took a group field trip to the volcanic island of Jeju to capture a dance in nature led by sound designer and Hatha yoga instructor Beck Junghyun.

Jeju Island, located just off the southern tip of Korea, was formed approximately 2 million years ago during the eruption of an underwater volcano. It is the largest island of the Jeju Province, which is the only self-governing province in South Korea, run not but mainland politicians, but instead by local inhabitants, such as pianist, sound designer and Hatha yoga instructor Beck Junghyun. Drawing from the volcanic energies of the island’s fertile earth, she leads a session of improvisational movement and electronics, an ethereal hybrid of narcotic beat science and sounds samples from traditional Korean musical forms.

Originally produced for a performance with Maro, an art and performance collective also based on Jeju Island, the composition, is titled ‘Sam Ra Man Sang’, which can be translated as ‘All the universal phenomenons in this world’, is inspired by the natural world and shamanic ‘kut’ rituals, ancient rites performed by Korean shamans. On Jeju Island specifically, these rituals center around the ‘bon-puri’, a collection of myths based on the invocation of a number of local deities.

“I see the body as a reflection, or expression, of our spirit,” explains the artist. “We feel pain and sadness through our physical bodies. I want to embrace our life as human, in the physical realm, even when it can be painful at times. We are on the ride even though we chose or not, so we might as well enjoy the ride.” Using an Akai APC40, a Push 2 controller loaded with samples of a gayageum, a traditional Korean 12-stringed zither, a Korg M50 keyboard and a Roland JD-XI synthesizer, Beck Junghyun guides a special performance from dancer Jisuk Ahn.

“He keeps quite a low profile, but is into the meditative side of music in a big way,” explains Junghyun. “He has performed in modern and traditional performances across Korea.” Flowing with and against the gentle flow of Beck Junghyun’s sounds, it’s as though Jisuk Ahn’s movements are responsive not only to the music, but to the lush vegetation with which the artists are surrounded, channeling the spirits of the island in the tradition of the many kut rituals performed on Jeju Island.

Perhaps best known as a founding member of legendary Korean fusion groups I & I Djangdan and SuriSuri MahaSuri, Beck JungHyun is at the forefront of a movement of artists combining cutting edge and traditional art forms in an effort to connect the past of Korean culture to the present. South Korean label Tonal Unity has been charting this modern take on traditional Korean sounds over two compilations, the second of which features both Beck Junghyun and DJ Bowlcut.

It was the two artists’ shared appearance on the compilation that alerted Beck Junghyun to Seoul Community Radio in the first place. Describing the station as having “variety, consistency and a bit of cuteness”, Junghyun approaches the electronic music scene in Seoul with an open-mindedness that is deeply informed by her spiritual practice. “Korean people need to be able to dance more freely in public not just in the dark inside clubs,” she enthuses.

“We need to let our bodies groove to nice music more often.” Looking ahead, Beck Junghyun’s remain firmly within the organic. “I hope for more small outdoor gatherings besides the club scenes,” she says, “like garden parties with DLs and live music at cafés during the day. I like hanging out in the day time, on through towards sunset for early night parties.”

Damian Lazarus will debut his Get Lost House Party in New...