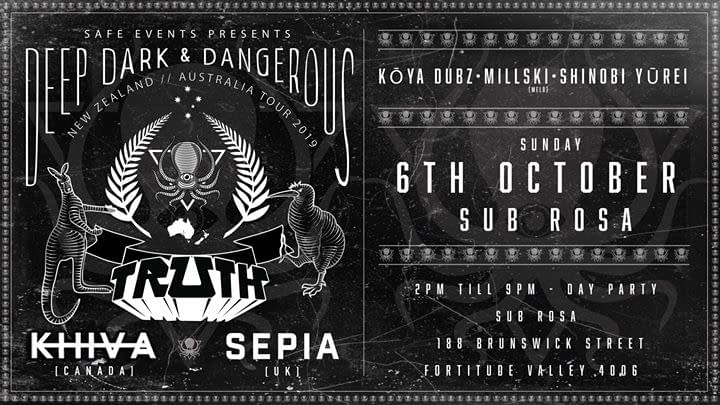 We’re calling, you gonna pick up?

Come spend your public holiday weekend right and join us as we take over the Sub Rosa main room for our very first Midnight Request Time Day party!

Dubstep powerhouse Deep, Dark & Dangerous heads down under for their first ever New Zealand and Australia tour. Fresh from making waves (bass waves) across the North American and European festival circuit, label bosses Truth are heading back to the best place on earth, and bringing two of their favourite DDD comrades with them!

Truth should need little introduction having (among other things) put New Zealand on the worldwide Dubstep map, won a NZ music award and started a keystone label within the current bass music scene . They have been holding down the 140bpm (and beyond) for over 10 years and have taken the Aotearoa sound to all corners of the globe. Situated between Los Angeles and Christchurch Truth have released countless singles on some of the most respected foundational labels in the genre such as Tempa and Deep Medi, as well as 4 critically acclaimed albums. Aside from pouring themselves into their music and their DJ sets, the last few years have seen Truth set up Deep, Dark & Dangerous… and take the bass music world by storm.

Khiva is a rising star and key member of the Deep, Dark, & Dangerous camp, having just released her much anticipated “Butterfly Effect” 12” on the label, the follow up to her “In The Quiet” and “Fresh Cut Love” releases. Her bass driven deep dark sets have earned her a rapidly growing following, garnering her the monkiers “Duchess of the Deep”, “Queen of Darkness” or just “Queen Khiva” among her fans.
Khiva made her NZ debut at Northern Bass 2018, impressing many. But this is her first full tour down south!

Making his NZ and Australian Debut is one of the most respected producers in the underground scene: Sepia. For the past 10 years he has been building his empire though his high octane, multi-genre sets and deep, dark & sometimes meloncholic production. With a hefty back catalogue spread across labels such as Deep, Dark & Dangerous, System, Infernal Sounds, Wheel & Deal, White Peach and Green King Cuts to name a few, he shows no sign of slowing down.