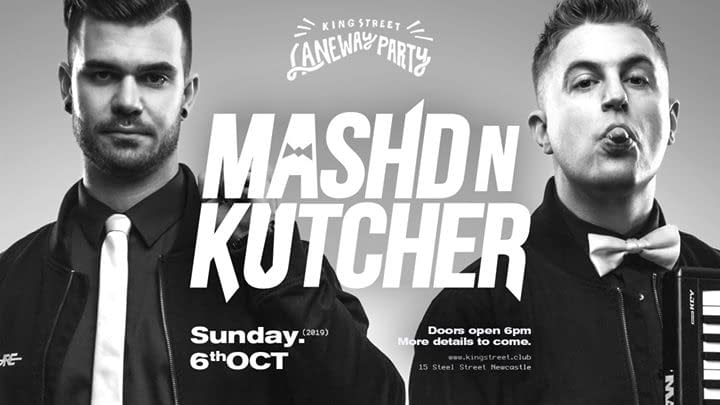 King Street’s famous Laneway Party is back for another long weekend, featuring Australia’s biggest DJ duo and one of our favourites Mashd N Kutcher.

With no work on Monday, we’ll be opening the doors at 6pm. The Laneway will be in full effect from the start with Elefant Traks producer and resident Jayteehazard. Plus a Laneway bar, free sausage sizzle, and silent disco from 10pm. All that happening outside, while inside we have another 10 DJs spread over 3 levels.

Doors open 6pm. Venue closes at midnight. Get in early for this one!

The pair of Brisbane-grown musicians have progressed from local DJs to one of the most prominent electronic acts to grace the music scene in recent years, with an ever-growing list of successes including being voted Australia’s #1 DJ duo (inthemix 2015), producing multiple Gold-selling records, hitting the one million followers mark on Facebook and achieving viral video success for their infamous ‘mashups’ almost too many times to count and continue to make waves around the world combining music, multimedia and exhilarating live-electronic performances.

Unless you’ve been living free from social media, there is no doubt Mashd N Kutcher would have appeared in your newsfeed one time or another, the pair have one of Australia’s biggest social reaches online in music, with each video reaching tens of millions of views – leaving the boys with over 250 million video views in total, winning the boys praise and partnerships from globally recognised brands.