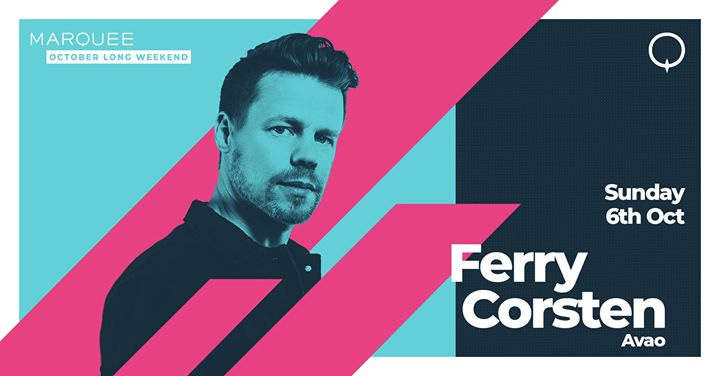 We’re wrapping up the long weekend with the legendary Ferry Corsten! Tickets at marqu.ee/FERRYCORSTEN-OCT06

Hailing from Rotterdam, the Netherlands, Ferry Corsten’s lustrous career is exemplified by a passion for music that began as a hobby and spiralled into a full-blown profession. From the outset, Corsten has been a prolific music-maker. With seven full-length studio albums under his belt and multiple Gold records to his name with songs that include ‘Punk,’ ‘Out Of The Blue,’ ‘Rock Your Body Rock,’ and other world-class hits like ‘Made Of Love’ featuring Betsie Larkin, ‘Hyper Love’ Feat. Nat Dunn and ‘Radio Crash’, Ferry’s output has always been plentiful and diverse. None more so is this true then with collaboration and remix work that has seen Ferry line-up alongside star names from the world of pop, rock, electronic and hip hop in Justin Bieber, U2, Moby, Faithless, The Killers, William Orbit, Duran Duran and Public Enemy. He remains and has always been ahead-of-his time, making music that becomes a template for others to follow. Striving always for excellence, this is an artist who is never satisfied with all that he’s accomplished, instead always pushing for the next exciting idea. For Ferry Corsten, the possibilities are limitless.