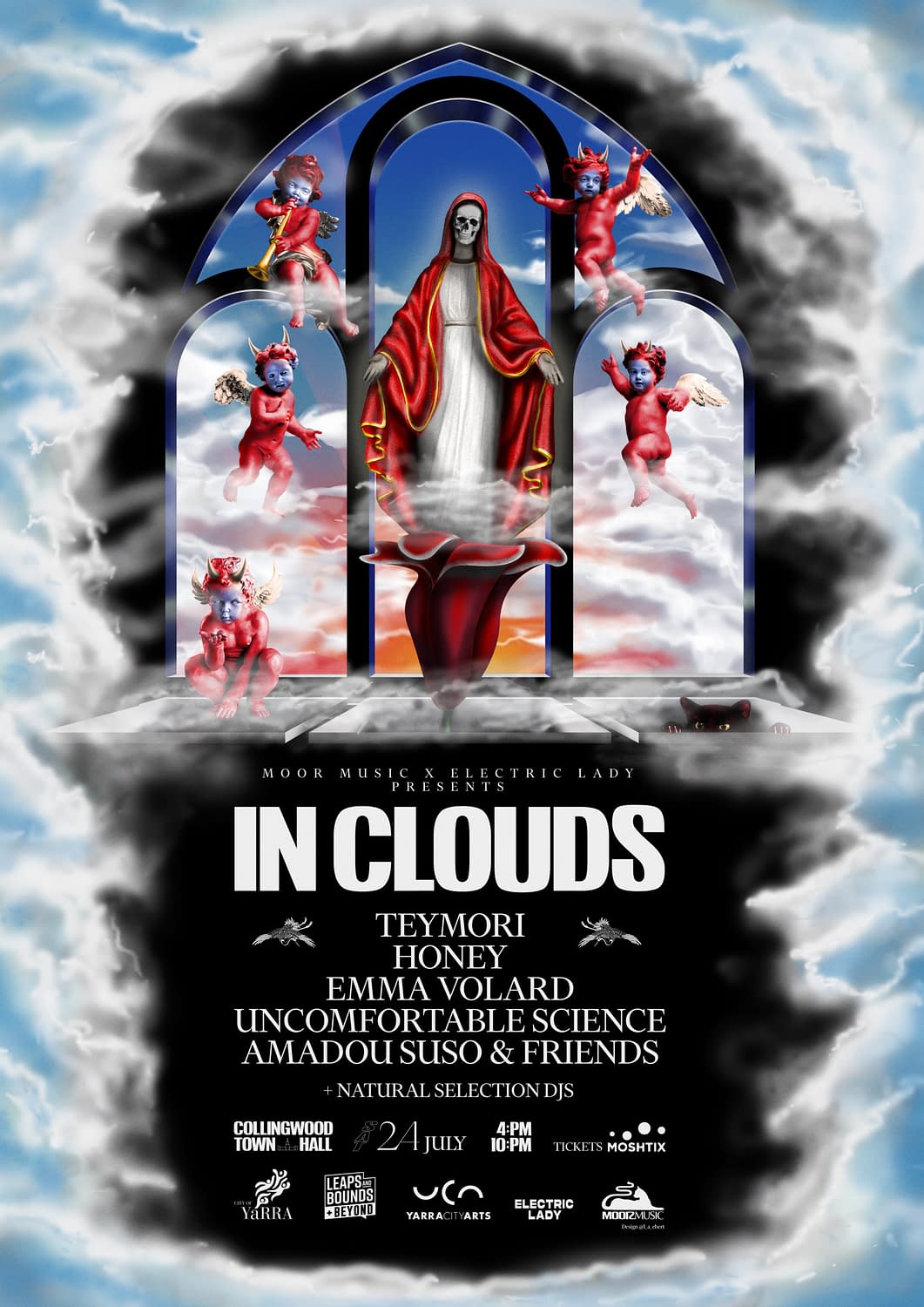 High above the celestial horizon, a melodic tempest is brewing. It’s as saintly as it is sinful. As sensorial as it is paranormal. It’s miraculous, even.

On July 24th, Jazz Doof luminaries Moor Music and their friends at Electric Lady will be taking over the Collingwood Town Hall for a good old fashioned Saturday sermon of sacrilegious boogaloo.

Showcasing the holy vanguards of Melbourne’s instrumental dance music scene, IN CLOUDS will feature a biblical assemblage of the city’s highest-flying live-music angels.

From afro-beat and progressive disco to nu jazz and future soul, this divine procession of punk jazz pioneers have been summoned to the alter to preach their symphonic scripture for one night only.

That’s right folks, stratospheric supersonics typically reserved for the caverns of the city’s underground, live at the Collingwood Town Hall for a lucky congregation of chosen ones to see.

Enhanced by audio-visual installations and live art performances throughout the evening, IN CLOUDS will take you as close as it gets to the unholiest of holy places. Because it ain’t depravity if it’s defying gravity. See you on the other side.

Melbourne-based producer Amin Payne has adopted his alias TEYMORI to explore a distinctive take on house music. His debut EP and corresponding live show merges the sounds of funk, afro, soul & percussive rhythms to take you on an organic journey through sophisticated grooves.

Cosmic disco meets ethereal house, acid boogie meets broken beat. Honey have firmly planted their flag at the crest of the disco-revival wave sweeping Melbourne, gathering a cult following of party people from their northside hive along the way.

Bandleader Lachlan Mitchell (Laneous, Vulture St Tape Gang, Harry James Angus, Jazz Party) directs an ever changing lineup of musicians through an improvised jam using only a whiteboard and a pen, shifting and contorting the composition of each song in real time with the unpredictable brilliance of a mad scientist. Featuring a rotating cast of familiar names from stalwart projects such as Hiatus Kaiyote, Barney McAll and Sex On Toast, Uncomfortable Science have earnt themselves a cult status in the Melbourne music scene.

Her music is deeply rooted in seeking justice and storytelling with political, environmental and personal undertones, as she shares her own reality and reflects upon universal truths.Through her distinct lyrical expression and incessant groove, Emma hopes to continue to provide a voice for not only her sister but a voice for change in today’s modern diaspora; a voice for those who aren’t heard.

The phenomenally talented Amadou Suso is a master of the kora, a traditional West African stringed instrument, and is also a direct descendent of the world’s first kora player, Koriang Musa Suso. As a music maker, or ‘jali’ by birthright, Amadou embodies the griot traditions of the Mandinka of West Africa. Known widely as the ‘Jimi Hendrix of the kora’, Amadou fulfils his ancestral duties to share the culture of his people through an intoxicating contemporary mastery of the African harp.

With his determination and passion for music, Charles-Eddy Vitry (Mr. Pitiful) landed his first residency in 2001 at the era-defining Parisian nightclub: Les Bains Douches, quickly making a name for himself on the Paris club scene, followed by stints in New York, Montreal and Switzerland and Australia. With a perplexing ability to mix anything from rock ‘n’ roll to electro; soul to house; acid jazz to minimal tech, Mr Pitiful has played alongside international and local artists at venues and festivals including Strawberry Fields, 161, Revolver, Toff In Town, Railway Hotel, My Aeon, Lounge, Section 8, St Jerome’s, Third Class and Glamorama.